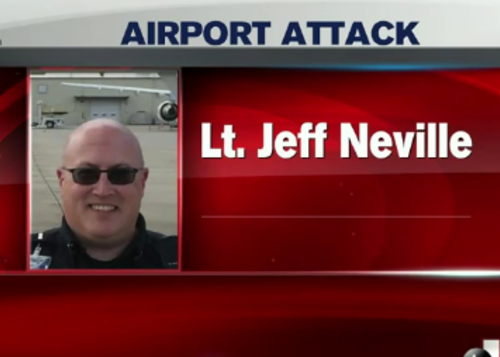 The FBI said it is investigating the stabbing of a Flint airport police officer at Bishop International Airport in Flint as an act of terrorism, and identified the attacker as Amor M. Ftouhi, 49, of Quebec, Canada.

Authorities said Ftouhi referenced killings in Syria, Iraq, and Afghanistan and yelled “Allahu Akbar,” while stabbing airport officer, Lt. Jeff Neville, in the neck and back. He is listed in stable condition.

One local law enforcement officer said there was no immediate indication that the suspect had ties to Flint.

An affidavit [1] by FBI agent Thomas Sondgeroth said that the suspect yelled “Allahu Akbar,” pulled out a knife and stabbed the officer in the neck.

The affidavit went on to say:

After stabbing the police officer, Ftouhi continued to yell “Allah” several times. He further exclaimed something similar to, “you have killed people in Syria, Iraq, and Afghanistan, and we are all going to die.” The law enforcement officer was able to subdue Ftouhi, who asked the officer why he did not kill him.

“I have also spoken with another FBI agent who reviewed surveillance video of the airport premises, including the location of the stabbing,” the FBI agent wrote in the affidavit. “The agent informed me that at approximately 8:52 a.m., Ftouhi entered the first level of Bishop International Airport carrying a red duffle and a dark satchel bag. At approximately 9:10, Ftouhi went up an escalator to the second level of the airport. At the top of the escalator, Ftouhi turned left to go to a restaurant. At approximately 9:37:56, Ftouhi left the restaurant carrying both bags.

“Ftouhi entered a second-floor restroom at 9:38:15 and left at approximately 9:38:43 without either bag. At 9:38:48, Ftouhi attacked the officer and was subdued by other law enforcement shortly after.”